Even as a child, I was fascinated by the wonderful world of animals. On trips, I would collect the strangest objects I could find in nature. Skulls, fossils and minerals. Dried-out insects, a snail shell left behind, a specially worn stone.

They were all fascinating forms for the inquisitive little boy I was. I became passionate about natural history, biological evolution and the stories behind them. Animals say a lot about the planet we live on, they mirror our society and us, humans.

As an artist, I still spend a lot of time in natural history museums. Not only for the reconstructed skeletons and extinct species. It is the stories behind them that inspire me the most.

Often the stories explain our traditions today. Like the giants in Antwerp. Thousands of years ago, a whale washed up on the banks of the Scheldt, its carcass buried in sand over the centuries. Only when the medieval city was being built did the bones come to light again. The surprise was great: the enormous bones could only have belonged to giants!

Ecosystems evolve. Animals become endangered, sometimes they do not even exist any more. I express the fragility of their existence in the fragile paper. Other historical animals, such as the dodo, are even extinct. It feels good to bring those species back to life. Each sculpture is unique, based on natural history research, complemented by my artistic eye.

The paper sculpture remains my starting point. On this basis, I continue to experiment with other materials and media, such as porcelain, metals and wood.

THE 8 OF IMPRESSED BY PLANTINE

Axel was asked, together with 7 other Antwerp artists, to create a new work inspired by the collective wood blocks of the Museum Plantin-Moretus. He created an impressive paper sculpture, a 3D inflated physical version of the longhorn beetle.

The narwhal: A scientifically reconstructed skeleton of a toothed whale that, several metres long, looks imposingly over the staircase of a stately mansion (Bank Degroof) 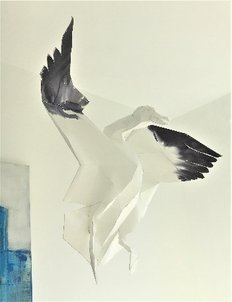