CLEAN ON THE EDGE OF DESIGN

The world-famous Belgian ceramicist Daisy Boman (1948) grew up in Mol and has lived and worked for years in Geel.

She studied art in Antwerp, followed by interior design and photography at the Academy of Art in Mol. At a later age, she developed a passion for ceramics.

In the early 80s she moved with her husband, the architect Ludo Wouters to Johannesburg, South Africa. There, Daisy followed a follow-up course in ceramic arts. In her studio in Johannesburg, Daisy grew in her own style.

Disturbed by the racial discrimination and segregation, products of Apartheid, Daisy returned to Belgium in 1986.

Out of that unrest she gave birth to her:

These Boman figures represent man in his most primitive form.

The structure is very rudimentary and strangely enough, the Boman figures have a cube-shaped head and are faceless.

Boman believes that we are fundamentally all the same, but that we are moulded by the culture and society in which we live.

Their faces are expressionless, but the unique body language of her figures transcends race and nationality.

The theme of her work is man in all his facets. Initially, she lets the spectator laugh in a subtle way, filling in his own story. Her work is a mixture of recognisable characters, of both vulnerability and sensitivity, which run through it like a thread.

It is precisely because of Boman's inner turmoil - a consequence of what is going on in the world - that her work continues to evolve, and the human being becomes more central to the complexity of society.

Her white is that of mourning, of pain, but also the colour of hope, of sunshine and of life. All these thoughts seem strange, because the work looks so beautiful and so clean and therefore balances on the edge of design. And perhaps this is the strong point of her oeuvre, namely that form, colour and content merge seamlessly into one another.

Her works show a common goal, the evocation of connection.

If you empathise, you will find a story that is at once universal: hers, but also yours and mine.

We are all equal, but - as Orwell said: Some are more equal than others ....

These representations of the human form, ranging from the small to the monumental, were formed in Westerwald clay and fired at 1160°C. Some are left plain, others are covered with pigments and oxides and polished with wax.

The Bo men are now known worldwide. They have been exhibited in London, Birmgham Strasbourg, Avignon, Zurich, Singapore and San Francisco.

A gigantic Bo-man sculpture, The Antwerp Whisperer, is now a popular tourist attraction right next to the MAS. 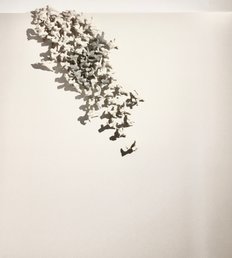 Title:  Only One Way 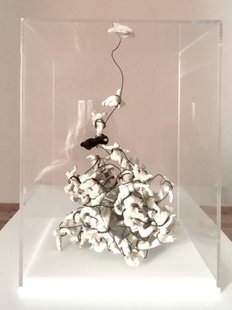