But is it art?  Self-proclaimed 'painter-maker' Denis de Gloire (1958) sings his way out of this weighty question.  His expressive canvases and sculptures bear witness to an acquired spontaneity and freedom that he taught himself by studying the art-historical tradition of painting.

De Gloire always had an irresistible urge for physical and social contact. He always sought out real life, imbued with an unadulterated "joie de vivre", of energy and joy, vitalism and liberation, and all this is reflected in his works. As an authentic Burgundian - an artist of life as well - he translates that joy and energy into expressive paintings and sculptures.

He is the artist, the action painter who loves the fight with materials.

His work is clearly influenced by various genres, from nouveau realism and Pop Art to geometric abstraction, minimalism and colour field painting.  His drip-paintings immediately catch the eye, a nod to the rhythmic, vibrating paintings of his illustrious predecessor Jackson Pollock, as if he were in league with the American abstract-expressionist. De Gloire's work is a crescendo of - generally cheerful - colours with a present grounding, before applying his dynamic touch and accents like a dancer.

Elusive, unorthodox and explosive. Denis De Gloire succeeds in giving the term and the idea of 'action painting' a fresh and amazing contemporary allure.

When you find yourself in front of one of Denis De Gloire's drippings, you can't help but lose yourself in it. As a viewer, you quickly get lost in the meander of colour planes, layers of paint and directionless lines. Each square centimetre seems to contain a whole universe, an impression that sticks to you no matter how far you move from the canvas.

His 'dripping brushes' - he uses the brushes as sticks to paint with strings of paint - are beautiful handmade Romanian spoons.

For some time, 4 works of 8 metres by 3 metres were exhibited in the Belfry of Bruges: "the four seasons".

The wow effect and a lasting good feeling afterwards. De Gloire enjoys the fact that he can make people happy with his colours. According to the artist, there is still a long way to go to discover the positivity in colour therapy. 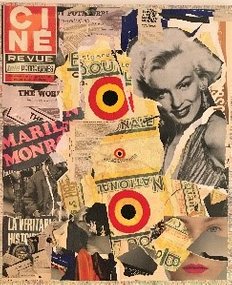 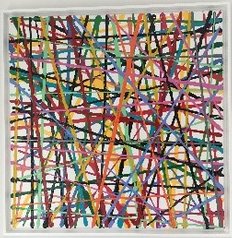 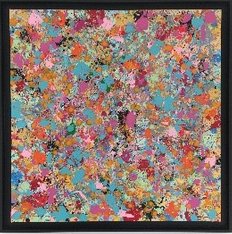