Els combined her law studies with training at the academies of Kontich and Leuven. After that she followed two years of sketching at the then St. Mary's Institute in Antwerp and also participated in workshops for watercolour, acrylic painting, portrait and model drawing. In 2008, she started a graphic design course at the academy in Merksem under the guidance of Goedele Peeters.

When you meet Els, you immediately notice her energy, passion, enthusiasm and spontaneity, and all that radiates from her work. She doesn't make any sketches beforehand, an idea grows in her head and the painting proceeds spontaneously and intuitively. The subject arises while she is painting. It often happens that she herself is surprised afterwards by a striking detail such as a special colour area, a recess ... She calls these controlled coincidences.

The more techniques you master, the greater your capacity to experiment freely and to develop your own style. She says that there is an interaction between her graphic work and painting, and that means an added value both for the one discipline and the other.

For a painter, choosing colours is extremely important. With a not so extensive set of basic colours, Els manages to put together a rich palette of colour nuances.

Els often works in series, a proof of her passion. She is bitten by a subject and she wrestles her way through it in a series of paintings, "peer pressure" being a good example.

The title refers to the pressure that the group exerts on the individual.

The individual is overshadowed by the power of the group.

At eye level, a line runs through these works, a reference to the blindness of man. The repetition of the same theme in each painting has an overwhelming effect. We collide with all those groups: figures without a face, without a name, skin colour indeterminate, people without distinction, people of all times, but whose sum, a group, impresses more than an individual, the tension between group and individual: a fact of all times.

And then suddenly Els leaves this series, which was the breeding ground for a new "peer reflections". The group has made way for monolithic figures, the heart area lights up and the blue aura refers to reason, an eternal dilemma.

The link with our harbour city can also be found in some of her new work in which she was strongly inspired by the striking harbour photographs of her husband, artist and photographer Roel Hendrickx.

The first impression that is created is that many of her works are blue, but Els denies this vehemently. There is blue but certainly so many other soft colours such as ochres and warm greys, each of which is additionally nourished by their under-layers. This brings us to one of the essential characteristics of Els's painting: its multi-layeredness. Almost no top layer is the only one, there are always several layers underneath which give the final layer an extra depth, an extra timbre, an extra

volume that you would never achieve with one opaque layer. In terms of content, too, there are more layers in the work than you might think to see at first sight. 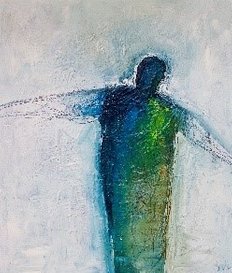 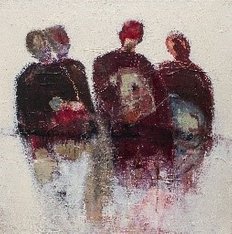 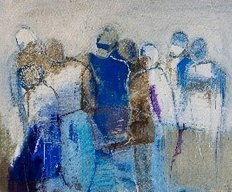 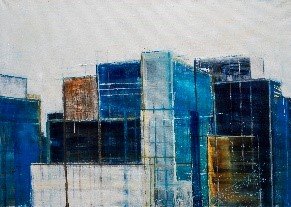 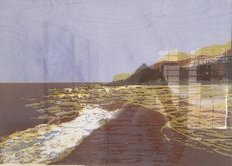 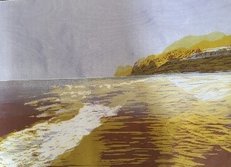 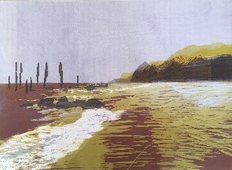 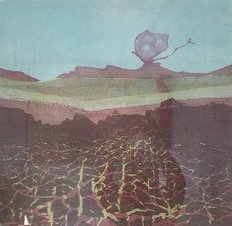 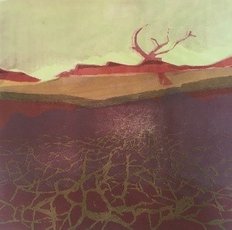 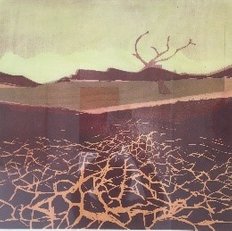 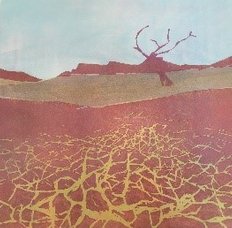 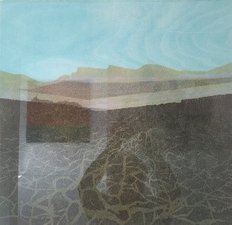 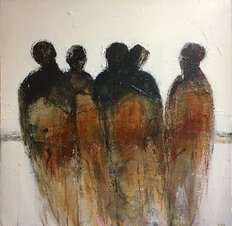 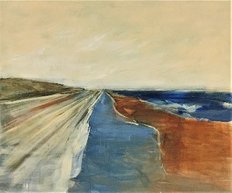 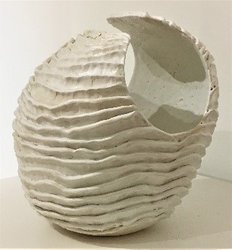 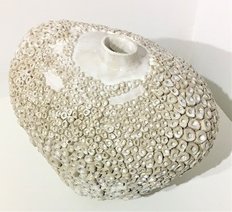