Afterwards he continued his education in drawing and painting at the Hasselt Art Academy.

In 85, he participated in the "Choose Art" competition.

After the regional and provincial selection, he won the Karel Van Miert prize at Flemish level.

Throughout his studies, the human figure & portrait remain a recurrent source of inspiration. From a young age Kris has been fascinated by great artists such as Alberto Giacometti, Egon Schiele and Sam Dillemans. These are some of the names that have shaped him into the artist he is today.

His definition of the art of painting is perfectly summed up in these sentences:

Painting is a collective term for the application of paint (on canvas):

A nervous stroke of the brush against a blurred surface...

For him, the portrait is a favourite theme thanks to its versatility;

You can put into it moods, feelings that are not necessarily the same as those the spectator feels or experiences.

The figures show themselves to be serene, subdued.

The sober colour palette strengthens the feeling of calmness, resignation.

The spectator is being watched...

The timelessness of a traditional portrait remains the starting point for the paintings.

Photos, both found and from the artist's own collection, serve as a basis.

Although not intended as a reminder of distant travels, several figures refer to various ethnicities.

This choice is not a statement, but rather evident and without intention.

The subtle use of colour gives the works tranquillity, modesty. No need for "a grand gesture".

The clear visibility of the act of painting lifts the portraits; the alternation of the light touch with an oily brushstroke, the thin watercolour-like start with the covering stroke. 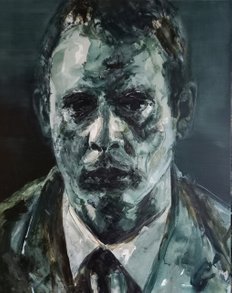 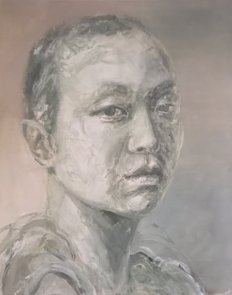 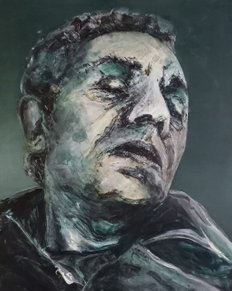 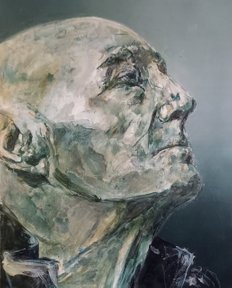 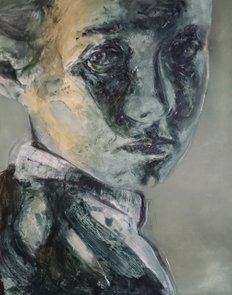 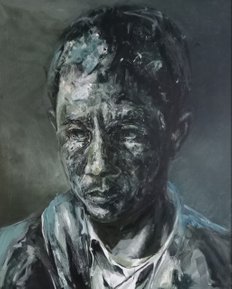